Ok. Before anything else, while I have your brief attention ;-) It is ShovelBums not “Shovel Bums”. It is a huge pet peeve of mine I have for absolutely no good reason, lol! The pattern is the CamelCase/medial capital convention adopted from computer programming. And I just like it better, it is a 90s thing :-) I don’t expect to ever win this because “Ski bum” is in such common usage, but I had to throw this out there.

I would like to call out and thank Jim Colburn who has been eminently dependable over the decades in helping to moderate ShovelBums. It is handy to have an extra set of eyes on the list and to bounce ideas off of. So thank you very much, Jim!

I don’t reflect on it until it is this time of the year, but it always strikes me I had no expectation when I founded ShovelBums I would still sit here 20+ years later writing to you all. My only career arc I ever contemplated 20 years out was my timeline from undergrad to Tenured professor. And well, that didn’t happen, LOL, I ended up here instead. Not that I did not have hopes for ShovelBums to succeed at becoming a useful tool for us all. That really was my only goal. It was something I had envisioned for years, and I lucked out with the timing. But I could not see that ShovelBums might become as useful as it seems to be for both employers and the rest of us in what seems to be a very healthy, symbiotic way. ShovelBums is a bit like this ‘65 cold war West German entrencher I picked up decades ago at an army surplus store in the middle of nowhere. It looked like a cool tool for $20. It wasn’t pretty, but wow, over the years it has proved extremely practical, useful, and dependable and is still there when I need it. This is all I ever hoped for ShovelBums to be for us all: Not pretty, just practical, useful, dependable, and there when you need it.

I hope at some point ShovelBums has been, or will be, that for you.

But then this last year happened. Wow.

I had always expected, but hoped to never see, a year like we just went through. We all suffered. I could see that reflected in the profound drop off of the number of postings coming across ShovelBums. If nothing else, ShovelBums serves as a bellwether for the profession. Though for a while last year it looked more like the canary in the coal mine.

A year ago I wrote to all of you:

“…in these strange pandemic days we live in ShovelBums will strive to continue to be a useful tool to you all. There have been 22 postings this April, and it is on track to be the worst April in 20 years … March wasn’t much better tying for the lowest number of postings, 32, in 21 years.”

”It is going to be tough, my friends. I don’t need to expand on that. We are all scientists. We know.”

It was tough. And it is still tough for many of you. As I mentioned recently, there is some hope on the horizon. Before the Pandemic hit, the number of job postings in January and February 2020 was the highest they had been in over a decade. And now again in 2021 January and February started out equally strong as 2020. And instead of the precipitous drop like last March, the number of job postings in March 2021 is almost double what they were last year and are actually quite strong compared to the last decade of postings in March. The postings this April? They are already more than double what they were in 2020 and the best since 2008. So that is four solid months of lots of excellent job opportunities. If these trends continue, you are looking at a lot of great opportunities in 2021 and beyond. I have heard from many professionals that they are all expecting tons of field work for the foreseeable future and beyond. The most challenging thing facing them? Finding qualified staff. That is where you come in.

And I have to say, that seems like a pretty fine anniversary present for all of you!

What I believe is important to remember though, and I strive to never lose focus on, is that ShovelBums only exists because of you. For 22 years you have helped to share the potential employment that is in every ShovelBums posting which has helped you and your peers fill ~65,000-70,000 primary positions: Staffing the archaeologists James Cameron brought back to the Titanic? Architectural Historians researching in the National Archives? Archaeological crews surveying at high altitudes in the Rockies? Excavating the far northern reaches of Canada? Lab work in the everglades? War veterans’ recovery on Pacific atolls? SHPO positions? PI’s in Phoenix? Archaeological Field Technicians in Iowa?

Yeah. ShovelBums, you, helped to staff them all.

It is impossible to calculate the number of cascading jobs that have followed professionals from their first hire via ShovelBums. Permanent positions that people have moved up to, companies finding new excellent staff via personal recommendation from a professional they first found from a ShovelBums post, marriages of equals who met randomly on a project they both came together through a ShovelBums post forwarded to them by a friend (which then begat some ShovelBabies).

The result is that in 22 years there have been a lot of sterile units, negative transect, empty float screens and deleted chapters. That is just par for the profession. But there is also a whole hell of a lot of overburden moved by your hands and untold thousands of Kilometers surveyed. From the humble soil core, to massive open air excavations and Lidar maps, you are collectively exposing some of the greatest discoveries of the last few decades and expanding our knowledge of prehistory significantly. That is pretty darn cool.

All of this. I can not emphasize this enough, ALL OF THIS is only because of you. I am just your ferryman, your Charon with a pole and a skiff. You, my friend. You are the one on your professional journey to walk among the dead. I simply give you to the opportunity to step onto that shore. The only obolos I expect for your safe passage is respect for the dead where ever I set you off.

Have an exceptional year, my friends. 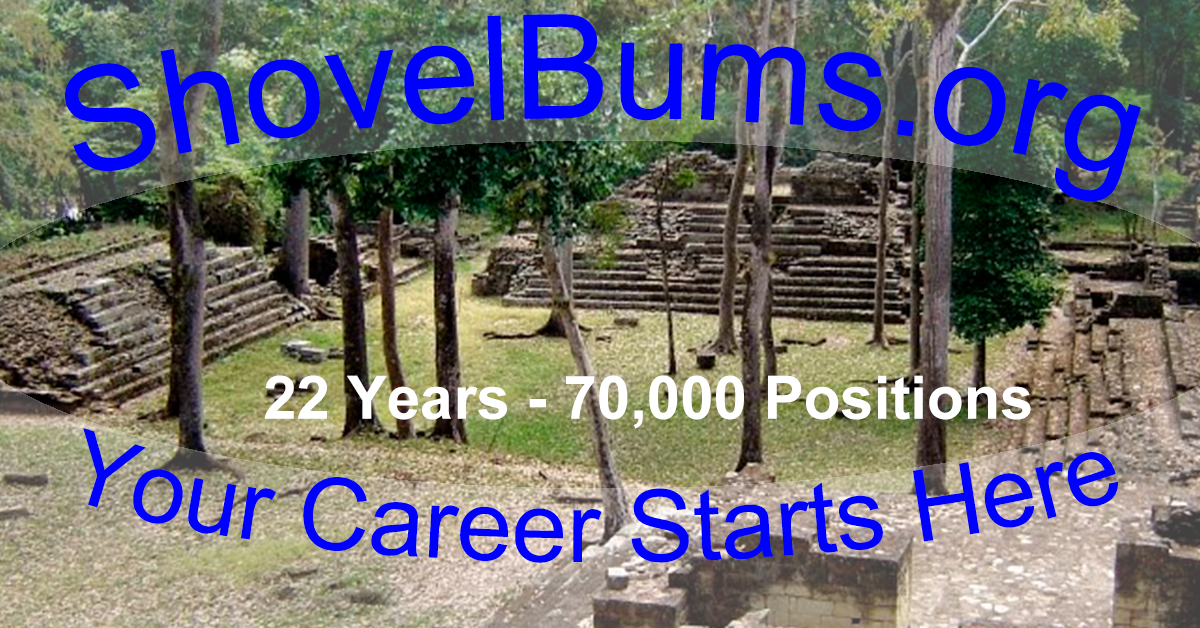